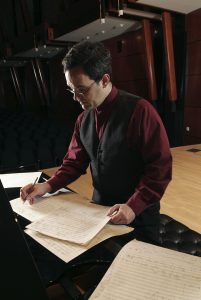 Composer Lawrence Dillon creates music that embraces our moment with a deep connection to the past and an open-minded curiosity about the future.

Despite losing 50% of his hearing in early childhood, Dillon began composing as soon as he started piano lessons at the age of seven. In 1985, he became the youngest composer to earn a doctorate at The Juilliard School, and was immediately appointed to the Juilliard faculty. He is now Composer in Residence at the University of North Carolina School of the Arts.  He is a two-time winner of the North Carolina Artist Fellowship, the highest honor accorded to artists in the state.

Writing about Dillon’s Through the Night (commissioned and premiered by the Emerson String Quartet), Stringendo called him “a superb composer… Dillon’s music is eminently approachable, intensely passionate and filled with surprises.”  Gramophone called his recording Insects and Paper Airplanes “sly and mysterious…arresting and appealing… Just when you thought the string quartet may have reached the edge of sonic possibilities, along comes a composer who makes something novel, haunting and whimsical of the genre… Highly recommended.”

Dillon’s music is published by American Composers Editions.  His recordings may be found on several labels, including Bridge, Naxos, Albany and CRS.

Composer in Residence at the University of North Carolina School of the Arts, LAWRENCE DILLON (born 1959, Summit, New Jersey) creates works that connect past and present in attractive and unexpected ways, provoking Gramophone to exclaim, “Each score is an arresting and appealing creation, full of fanciful and lyrical flourishes within traditional forms that are brightly tweaked.” His music is characterized by a keen sensitivity to color, a mastery of form, and what the Louisville Courier-Journal has called a “compelling, innate soulfulness.”

Dillon’s music, in the words of American Record Guide, is “lovely…austere…vivid and impressive.” His string quartets have received particular acclaim, with performances by the Emerson, American, Borromeo, Cassatt, Daedalus, Mendelssohn quartets, to name a few of the most prominent.

In October 2010, Bridge Records released Insects and Paper Airplanes, a disk of Dillon’s chamber music featuring the Daedalus String Quartet and pianist Benjamin Hochman. Gramophone called it “highly recommended,” saying, “Just when you thought the string quartet may have reached the edge of sonic possibilities, along comes a composer who makes something novel, whimsical and haunting of the genre.”

The same year, Dillon’s recording Appendage and Other Stories made Fanfare Magazine’s 2010 Want List. Raymond Tuttle wrote of it, “This is a terrific work. In fact, it is so good it made me weep. And Dillon, with his vivid imagination and his ear for vocal and instrumental color, seems to be a terrific composer.”

In April 2011, Naxos released Violin Music of Lawrence Dillon featuring Sphinx Grand Prizewinner Danielle Belén. MUSICWEB INTERNATIONAL described it as “an hour of music that is often profound without being pretentious, sometimes light-hearted but never ‘lite’, humorous without being arch, and immensely appealing but never frivolous.”

In 2014, Dillon completed his long-term chamber project, the Invisible Cities String Quartet Cycle, a cycle of six quartets focusing on Classical forms, with Quartet No. 6: Rapid Eye, commissioned by the Carpe Diem Quartet. The Emerson Quartet commissioned String Quartet No. 5: Through the Night and premiered it on March 9th, 2010 at the Kölner Philharmonie in Cologne, Germany, with subsequent performances in Seattle, Winston-Salem, Washington, New York and Philadelphia. Following the performance at the Smithsonian Associates, the Washington Post wrote, “Dillon has a huge repertoire of technical tools on his belt, and he uses them liberally but always sensitively and intelligently.”

Dillon was the Featured American Composer in the February 2006 issue of Chamber Music magazine.

Figments and Fragments, an orchestral fantasy that imagines the wild ruminations of Robert Schumann’s mind as he lay paralyzed in an asylum in Endenich, was commissioned by a consortium of five orchestras, resulting in performances in Los Angeles, Salt Lake City and Boise from May through November 2010.

The Better Angels of Our Nature, Dillon’s composition for piano trio and narrator based on texts of Abraham Lincoln, was a winner in the first composer competition sponsored by the Ravinia Festival in July 2008.  It has already had over forty performances in eleven cities.

His Amadeus ex machina was chosen to represent the US in celebrations of Mozart’s 250th birthday in Salzburg, Vienna and Graz, Austria in the spring of 2006.  The piece has also been performed by the St. Petersburg Chamber Philharmonic (where Dillon was a guest of the St. Petersburg Rimsky-Korsakov Conservatory) and awarded a special commendation by the 2003 Masterprize panel in London.  It was also chosen as contemporary competition piece for the 2002 Vakhtang Jordania International Conducting Competition in Kharkov, Ukraine, and has had US performances by orchestras in Minnesota, Indiana, Kentucky, Utah, North Carolina, and at the 2006 Spoleto Festival USA in Charleston, South Carolina. Amadeus ex machina was a featured work on the 2010 Conductor’s Guild Conference in Copenhagen.

In February 2005, hornist David Jolley and the Carolina Chamber Symphony premiered Dillon’s Revenant: Concerto for Horn and Orchestra with the composer conducting.  The piece went on to win a prize from the International Horn Society. Also in 2005, his piano quartet What Happened was premiered in Paris at the Maison Danois by the Atlantic Ensemble.

Dillon’s Wright Flight, commissioned by the 2003 illuminations festival, was premiered at Roanoke Island Festival Park in July of that year. The work combines orchestra, projected images and three strands of narrative to tell the story of the Wright Brothers’ first flight. Wright Flight was selected as a featured work in the Wright Brothers’ Centennial Celebration at Kitty Hawk in December 2003.

A recording of his music, featuring flutist Ransom Wilson along with the Borromeo, Cassatt and Mendelssohn String Quartets, was released by Albany Records in the summer of 2002. American Record Guide called it “lovely…austere…vivid and impressive.” CVNC cited the recording as “delightful and engaging…inventive and skillfully scored…fascinating and imaginative.” In NewMusicBox, Amanda MacBlane commented on a “pure mode of expression that layers lines so gracefully they seem to play themselves with an energetic fervor. Dillon’s painterly style carefully colors phrases with glissandi and subtle accents underneath an intricate tapestry of sound.”

Dillon’s children’s piece Snegglish Dances was commissioned and premiered by the Louisville Orchestra, which subsequently won the 2001 Leonard Bernstein Award for Educational Programming from ASCAP and the American Symphony Orchestra League.

Partially deafened by a childhood illness, Dillon was the youngest of eight raised by a widowed mother. His earliest memories are of a house filled with the sounds of older siblings practicing the piano. At the age of seven, he began his own lessons, and quickly developed the habit of composing a new work each week.

In 1985, Dillon became the youngest composer to earn a doctorate at The Juilliard School, winning the Gretchaninoff Prize upon graduation. As a student, he also won an ASCAP Young Composers Award and first prize in the annual CRS New Music Competition. He studied privately with Vincent Persichetti, and in classes with Milton Babbitt, Elliott Carter, David Diamond, Leon Kirchner and Roger Sessions. Upon graduation, he was appointed to the Juilliard faculty.

In addition to his duties at UNCSA, Dillon has held residencies with numerous summer festivals, including the Cooperstown Chamber Festival, the Appalachian Summer Festival, the Wintergreen Summer Arts Festival, the Charles Ives Center, the Saugatuck Festival, the Swannanoa Chamber Music Festival and the Killington Festival. He has been a guest composer at the Curtis Institute of Music, SUNY-Stony Brook, the University of Utah, the Colburn School of Music, Seisen International School in Tokyo, the St. Petersburg Rimsky-Korsakov Conservatory, the Hartt School of Music, Indiana University, Boise State University, the University of California at Sacramento, Eastern Michigan University, Eastern Carolina University, the Buckley School, the Museum of the American Piano in New York and the Reynolda Museum of American Art. In 1999, he was named Music Program Director for the illuminations Summer Arts Festival on Roanoke Island, a position he held for seven years.

His works have been performed and broadcast throughout the Americas, Asia and Europe. His Violin Concerto was commissioned and premiered by the late Naumberg-winner Elaine Richey.

Dillon has earned numerous awards for his work, including honors from the American Music Center, the National Endowment for the Arts, the Mary Flagler Cary Charitable Trust, Masterprize, the Mary Duke Biddle Foundation, the Jerome Foundation, the Pew Charitable Trusts, the Ravinia Festival, the International Horn Society and Contemporary Record Society. In 1999 and 2013, he was awarded Artist Fellowships from North Carolina, the highest honor accorded to artists in the state.

Dillon’s music is recorded by Albany Records, Bridge Records, Naxos, Channel Crossings and CRS. His works are published by American Composers Editions, a subdivision of BMI.  His blog, infinite curves, is featured on ArtJournal http://www.artsjournal.com/curves/.