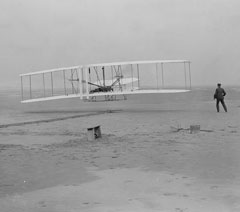 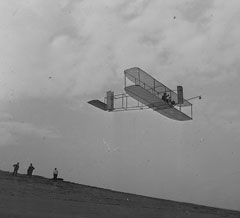 On December 17, 1903, Wilbur and Orville Wright flew the first engine-powered aircraft off the dunes of Kitty Hawk, North Carolina.  To celebrate the centennial of this historic event, the Illuminations Festival of the North Carolina School of the Arts commissioned Wright Flight, a composition for orchestra and three narrators that revisits the events of that historic day.

A member of the Kitty Hawk Lifesaving Station, John Daniels was an important figure in the drama of the first flight, and much of what he describes is factual, including his participation in the first flight photograph, as well as his unfortunate mishap at the conclusion of the fourth flight.

Virtually all of the text spoken by the Wright Brothers comes directly from their letters and journals.

In addition to their prowess as scientists and aviators, Wilbur and Orville Wright were accomplished amateur photographers.  A montage of shots selected from the hundreds of photographs they took of Kitty Hawk, its citizens, and their own tests and flights are projected onto an overhead screen as a seamlessly shifting backdrop for the performance.

Wright Flight has had dozens of performances around the US, but none of them have been filmed. This movie file shows the first six minutes of projections, synchronized with the music and narration.

The size of the projections for this presentation are, of course, dependant upon the venue in which is it is to be presented. However, it is suggested that the projection surface be a minimum of 9′ x 12′.

The projection should be above and slightly behind the orchestra (keeping in mind sightlines from the audience in regards to the conductor).