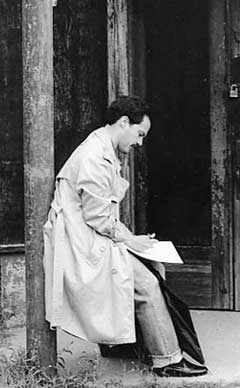 Orpheus in the Afterworld was composed on the heels of a song entitled Summer Rain based on the aftermath of the familiar legend of Orpheus. The song imagines Orpheus frozen in the moment of losing his love, Euridice, conjuring up a storm to spell out his rage and anguish. The first stanza

Summer rain,
shrouded sky,
with a drone
that dims the eye,
in a stunning moment, now the world’s undone.
If I turn once more, will you still be gone?

provided the primary substance for the first movement of the concerto, both musically and emotionally: this is a work of abrupt contrasts between aggressive, rhythmic passages and longer, lyrical lines.

The first three notes of the piece (Eb, D, C#) are produced by singing and playing the flute simultaneously; they form both the primary motivic material and referential key centers for the work as a whole.

The second movement treats the Baroque sarabande to postmodern juxtapositions: a brief ritornello in the strings alternates with 1] an arioso flute melody over a ground bass in the muted horns, 2] an increasingly dissonant trio section, 3] a solo cadenza, and 4] a return to the original ground bass combined with material from the trio. The result is a slightly off-balance synthesis of old and new.

The third movement combines the aggressive rhythms of the first movement with the ground bass of the second in a furious bacchanal that demands percussive residual tones and stratospheric playing from the flutist.

Orpheus in the Afterworld was commissioned and premiered by Elizabeth Holler Ransom and the Carolina Chamber Symphony.

ORDER ORPHEUS IN THE AFTERWORLD: