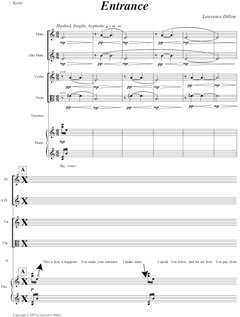 Entrance and Exit are framing devices for a chamber concert. Entrance is about layers of memory and connections to the past: a story gradually unfolds about an audience member whose mind wanders away from the music and drifts back to another time and place.  Her memories of that other world are influenced by the music she is hearing, and, in turn, the music responds to the journey of her imagination.

Exit is a quick spin through an entire life cycle, foretelling the future of an audience member as a metaphorical journey from birth to death and beyond.

Each piece is scored for actor and five instruments, although the instrumentation differs:

more about the recording

In both pieces, the text and music are held together through a complex system of cross-cueing between the actor and musicians.

They are the same for a moment, then they are different.   You are paying close attention, but later your mind will wander.  Do not be ashamed:  Even then, the sounds and words will be one, even when you are no longer with them.   Your mind will wander.   You may be on a beach, or in a studio, or studying a photograph.  Let me tell you about a photograph, then you can decide.   First, I must ask you:  Did you see her?   There is a woman sitting near you.   She arrived a short time ago.   Did you notice?  I will tell you about her.  She is listening now.   She is paying close attention, but later her mind will wander, and she will feel ashamed.   She will want to listen, but her mind will be too full.   Her mind will wander out the door and into the street, retracing its path through the evening, folding back through the hours, curling down through many years, as if they were just this afternoon.

This afternoon, her mind is on this afternoon.   She arrived at his home, and that is where she is now.  Her mind is there, no longer with us.   It is there, in his home, in his back room, his studio, even as she sits with us and tries to listen. Her mind is there, with him, in his studio.   She is sitting in a chair with high arms, a green chair with cherry legs and arms.   She is sitting with one foot folded under her, slightly sideways.   He has given her a book.   She is sitting with one folded leg, one leg extended, the book resting in her lap, open to the page he has given her.   He is standing before her, studying her.   He is studying her through a lens.   She is there in the lens, one foot folded beneath, hair tumbling, but he can’t see her face.   She is looking down.

The man lifts himself to one elbow, one elbow in the sand.   He looks out to the sea.   The waves are green.   They are rolling helplessly over themselves.   They are rolling slightly sideways.   He is watching them.   He is studying them, propped on one elbow.   He is paying close attention.   They are rolling amiably in and curling beneath, rolling over and bending down.   They are the same for a moment, then they are different.   He has propped himself on one elbow.   Now his mind is wandering.   He looks down at the woman.   She is lying on her stomach beside him.   She is awake.   She is silent.   She is listening closely.   Her shoulder is rolling generously in and folding underneath.   He is watching as the white stripe on her shoulder rolls helplessly over itself, slightly sideways, curling below.

His mind stops wandering.   He lowers himself slowly and presses his lips to the white stripe on her rolling shoulder, and at that moment they are the same:  the lips, the stripe, the couple on the beach, the woman in the studio.   At that moment she looks up from the book.  She looks up at the camera.   At that moment her eyes pierce the lens.   He presses the shutter.   It opens, and in that moment her eyes are inside the camera.   She has entered the camera.   She is folded over, flipped upside down, slightly sideways, pressed against the film.   Her eyes are pressing into the film.   The film is reading her, flipped upside down, slightly sideways, hair tumbling.   This is how it happens:  the film stops wandering.   It is reading her.   She is reaching down from a gray chair, one leg curling above, an open book hanging from her lap, an empty beach with a man and woman suspended lip to stripe.
___

And now she is here.  You can hear her, all around.  You can hold the photograph in your hands.  If you hold it long enough, lost in the questioning curve of her brow, the corners will grow bent and crumble.   I know this is true.  And though the image is not so clear as it was many years ago, those gray waves are yours.   That white stripe is yours.   The book is yours.   Your mind is free now, to wander.